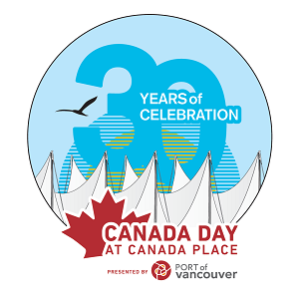 Vancouver, B.C.: The Port of Vancouver will present the 29th annual Canada Day at Canada Place event on July 1, the largest Canada Day celebration in the country outside of the nation’s capital. The event will also mark the 30th anniversary of Canada Place, built for Expo 86.

Expo 86 welcomed the world to Vancouver, and Canada Place had the honour of sharing the very best of this country as the Canada Pavilion. This year’s concert program will include both legends of the 1980s and today’s favourites with headliner acts Aaron Pritchett and Sheena Easton, as well as feature entertainers including Barney Bentall, Mo Kenney, Bear Mountain, Rococode, Twin Kennedy, Willa and more.

“Canadians from across the country show their pride in their history, culture and achievements on Canada Day and each year we are pleased to welcome guests from far and wide to celebrate here at Canada Place,” said Tom Corsie, President of Canada Place Corporation and Vice President of Real Estate at the Vancouver Fraser Port Authority.

The full day of free family fun, live music and performances will run from 10:00 a.m. to 6:00 p.m. on July 1 at Canada Place, Jack Poole Plaza and on the surrounding streets. Highlights will include the Coast Capital Savings Youth Zone, extreme pogo stick demonstrations, a family-friendly licensed area on the North Point of Canada Place, food carts, street hockey, the Canadian Forces Zone and the traditional citizenship ceremony welcoming 60 new Canadians.

The festivities will continue into the evening with the popular Canada Day Parade presented by Port of Vancouver, beginning at 7:00 p.m. at Georgia and Broughton, and the Canada Day Fireworks Show at 10:30 p.m. in Burrard Inlet. Premium viewing is available in the Fireworks Viewing Zone, along the west promenade of Canada Place. Tickets are available at www.ticketstonight.ca.

The 29th Annual Canada Day at Canada Place event is presented by Port of Vancouver and made possible thanks to the generous support of partners including the Department of Canadian Heritage and the Government of Canada, the Canadian Forces, Coast Capital Savings, CN, Nature’s Path Foods, Canadian Association of Petroleum Producers, Air Canada, the Vancouver Convention Centre, City of Vancouver, WestPark and Seaspan. Media partners include Global BC, Vancouver 24 Hrs, Shaw, OMNI Diversity Television, Vancity Buzz, CHMB AM1320, CFOX, News Talk 980, CKNW, and Rock 101.

Canada Place at Port of Vancouver is an internationally-recognized landmark and venue for world-class events and inspirationally Canadian experiences. For the last 30 years Canada Place has served as a hub for national celebrations, including National Aboriginal Day, Saint-Jean Baptiste and Canada Day at Canada Place. Next year will mark the 150th anniversary of Canada’s confederation and, located in the heart of Vancouver’s waterfront, Canada Place is perfectly positioned to serve as a hub of celebrations on the west coast with an incredible year of programming. Canada Place is also homeport to the Vancouver-Alaska cruises, and houses Vancouver Convention Centre East, Pan Pacific Hotel, FlyOver Canada, World Trade Centre and WestPark. The Vancouver Fraser Port Authority manages the Port of Vancouver and is the owner and operator of Canada Place. The Port of Vancouver is Canada’s largest port and the third largest tonnage port in North America, facilitating Canada’s trade with more than 170 world economies. Located in a naturally beautiful setting on Canada’s west coast, port terminals and tenants enabled the trade of approximately $200 billion in goods in 2015, generating an estimated 100,000 jobs, $6.1 billion in wages, and $9.7 billion in GDP across Canada. The Vancouver Fraser Port Authority is responsible for the stewardship of federal port lands in and around Vancouver, British Columbia. It is accountable to the federal minister of transport and operates pursuant to the Canada Marine Act.