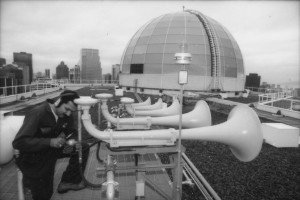 O Canada! Did you know that the Heritage Horns sound the first four notes of our national anthem everyday at noon?

About the Heritage Horns?

The history of the horns dates back much further. The Heritage Horns, as they are known at Canada Place, were built as a BC Hydro Canadian Centennial project in 1967 and were designed by engineer and sound specialist, Robert Swanson. For many years, they were positioned on the roof of the original BC Hydro Building where they sounded every high noon in the downtown core for more than 20 years. When BC Hydro vacated the building in the 1990s, the horns fell silent. Shortly thereafter, a permanent home was found. Canada Place Corporation acquired and refurbished the horns, and placed them on the roof of the Pan Pacific Hotel at Canada Place. And on November 8th of 1994, the familiar sounding of the horns returned to Vancouver at noon, just in time for lunch!

Listen to the Heritage Horns now!