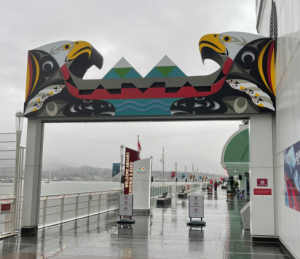 For thousands of years, the Coast Salish peoples have travelled and lived within the vast territory surrounding Vancouver.

Although based on traditional motifs and elements of our Salish Peoples, this contemporary artwork represents everyone who comes to the Salish Sea. “Salish Sea, the Journey Within” reminds us of the thriving Coast Salish Culture … and connects to all cultural backgrounds of the people who now share and love this land.

In the central portion of our artwork, we are depicting the Lions of the North Shore. They are designed in a Musqueam basketry style of mountains and valleys flanked by twin thunderbirds. The Lions are seen in the background framed by the Archway, so we decided to include them since they are often hidden by weather during the winter months. Here we are showing the eagle of the West, and the East. Both have come together to protect the unwavering spirit of the people who braved these lands.

Eagles keep a significant role in our culture and within our artwork as well. The Eagle is the ruler of the sky and can transform himself as he has a connection with our creator. Eagle symbolizes grace, power and has exceptional intellectual abilities. The gifts the Eagle shares are the ability of foresight and an indication of good times to come. The Eagle is a sacred, wise and noble creature representing prestige and we celebrate these connections in our design.

The front-most layer of artwork depicts Orcas. Orcas are the guardians of the ocean, and Orcas are closely related to humans. We are told many legends as children of the Whale People and their villages beneath the sea.

Within the Orca dorsal fins are Salmon. Salmon are a symbol of abundance, wealth and prosperity because Salmon are the primary food source for the people of the Northwest Coast. It is also symbolic of dependability and renewal, representing the provider of life. Salmon in pairs are good luck. We have designed the Salmon as strength using a braid symbolic of a cedar bark twisted rope. The interaction between the panels works together like a puzzle with add-ons of colour.

The overall imagery in our design reflects on the site’s history, the continued change of the site, and the natural area itself.