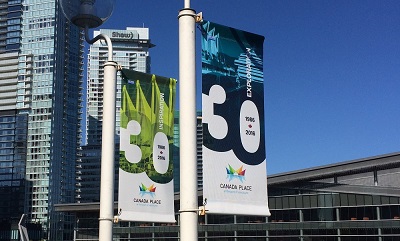 Vancouver, B.C.: Today marks the 30th anniversary of Canada Place in Vancouver. Exactly thirty years ago, Expo 86 welcomed the world to Vancouver with its opening ceremony, launching a world fair that shone a spotlight on our port city.

Canada Place was one of several unique and recognizable architectural features constructed for the international exposition. The building, designed to resemble a ship with five large sails against a backdrop of the mountains, water and city, served as the Canada Pavilion during Expo 86.

In 1986, the Government of Canada dedicated the facility to the people of Canada and the world. Today, Canada Place is owned and operated by the Vancouver Fraser Port Authority and houses the Vancouver Convention Centre East, Pan Pacific Hotel, FlyOver Canada, World Trade Centre and WestPark. Canada Place is also home to the port authority’s head office. As Canada’s largest port, the Port of Vancouver supports close to one in every five dollars of trade in goods that flow through our country. In addition, the Canada Place cruise ship terminal welcomes over 800,000 passengers every year.

“According to a Talk Vancouver survey carried out by the City of Vancouver last year, Canada Place was recently identified by Vancouver residents as the landmark that best represents the city,” said Tom Corsie, President of Canada Place Corporation and Vice President of Real Estate at the Vancouver Fraser Port Authority. “This is an important milestone in Vancouver’s history as we reflect on how Canada Place played a role in connecting people from around the world during the Expo 86 celebrations. We continue to connect to the world today, both through our activities as Canada’s largest port and as home to some of the largest community celebrations in the country.”